If one or more of the symptoms you experience before or during your period causes a problem, you may have a menstrual cycle "disorder." These include:

You can get bleeding problems and menstrual disorder treatment in gurgaon by expert doctor at Kalosa Obs and Gynae Clinic.

A brief discussion of menstrual disorders follows below.

can be common at various stages of your life—during your teen years when you first begin to menstruate and in your late 40s or early 50s, as you get closer to menopause. Any vaginal bleeding after menopause isn't normal and should be evaluated immediately.

Heavy menstrual bleeding can be caused by:

• Structural abnormalities in the uterus, such as polyps or fibroids

These include:thyroid problems, blood clotting disorders such as Von Willebrand's disease, a mild-to-moderate bleeding disorder, idiopathic thrombocytopenic purpura (ITP), a bleeding disorder characterized by too few platelets in the blood, liver or kidney disease, leukemia, medications, such as anticoagulant drugs such as Plavix (clopidogrel) or heparin and some synthetic hormones.

complications from an IUD, fibroids, miscarriage, ectopic pregnancy (which occurs when a fertilized egg begins to grow outside your uterus, typically in your fallopian tubes), infections, and precancerous conditions of the uterine lining cells.

At Kalosa Obs and Gynae Clinic, You can get best Menorrhagia treatment in Gurgaon, Delhi NCRby expert Dr. Deepti Asthana .

This condition, called amenorrhea, or the absence of menstruation, is normal before puberty, after menopause and during pregnancy. If you don't have a monthly period and don't fit into one of these categories, then you need to discuss your condition with us.There are two kinds of amenorrhea: primary and secondary.

It is diagnosed if you turn 16 and haven't menstruated. It's usually caused by some problem in your endocrine system, which regulates your hormones. Sometimes this results from low body weight associated with eating disorders, excessive exercise or medications.

It is diagnosed if you had regular periods, but they suddenly stop for three months or longer. It can be caused by problems that affect estrogen levels, including stress, weight loss, exercise or illness. Additionally, problems affecting the pituitary gland (such as elevated levels of the hormone prolactin) or thyroid (including hyperthyroidism or hypothyroidism) may cause secondary amenorrhea. This condition can also occur if you've had an ovarian cyst or had your ovaries surgically removed.

Most women have experienced menstrual cramps before or during their period at some point in their lives. For some, it's part of the regular monthly routine. But if your cramps are especially painful and persistent, this is called dysmenorrhea and you should consult health care professional like Dr. Deepti Asthana. She is one of the best painful periods treatment provider in Gurgaon, Delhi NCR.

PMS is a term commonly used to describe a wide variety of physical and psychological symptoms associated with the menstrual cycle. About 30 to 40 percent of women experience symptoms severe enough to disrupt their lifestyles. Symptoms develop about five to seven days before your period , disappear once your period begins or soon afterand are present for at least three consecutive menstrual cycles.

PMS appears to be caused by rising and falling levels of the hormones estrogen and progesterone, which influence brain chemicals, including serotonin, a substance that has a strong affect on mood.

The most common symptoms of PMDD are heightened irritability, anxiety and mood swings. Women who have a history of major depression, postpartum depression or mood disorders are at higher risk for PMDD than other women. PMDD-related symptoms (both emotional and physical) are cyclical. When a woman starts her period, the symptoms subside within a few days.

To help diagnose menstrual disorders, you should keep a record of the frequency and duration of your periods. Also jot down any additional symptoms, such as cramping, and be prepared to discuss health history. Further, you would be asked to go for general blood tests, ultrasound pelvis, and hysteroscopy and biopsy of the endometrial tissue and if required, laparoscopy. Treatment is given according to the findings and patient's symptoms & profile. 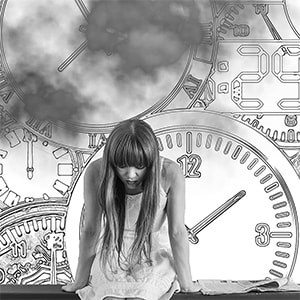